The Science of Interstellar: Wormholes

In the universe as we know it, there are no interstellar planets close enough to Earth that is reachable by man. What if there was a theoretical short cut that we could take that could make traversing the universe more possible for humans? This is what the wormhole theory says. The concept of a wormhole is based on the belief that space time is not in a singular plane like we believe but instead is curved and has folds. Then, there is a hole between two different points in space time that creates a shorter distance between those two points. 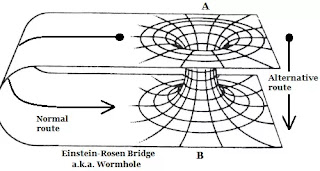 The diagram above best shows the concept of a wormhole. The movie Interstellar is very heavily based on the assumption that wormholes are real. In the movie, the astronauts try to find a suitable habitable planet for humanity by traveling through a wormhole. In the movie and in reality, the only way for humans to get outside our solar system and reach another planet is to find a short cut because they would be many light-years away. To put that in perspective, the closest plant to our solar system is Proxima Centauri, which is 12 light-years away, which would take 12 years of travel to reach and that is assuming the person is travelling the speed of light, which is impossible. A more realistic estimate would be if we could get the ship to one percent the speed of light, the trip would take 1200 years to complete. While the theory of wormholes is an intriguing one to think about, there is no hard physical evidence to support this theory.
Posted by CKane at 8:39 PM 1 comment:

Avengers: Infinity War is one of my favorite super hero movies. It is an enthralling tale of superheroes teaming up to take down the evil threat of Thanos. The more I watch the movie, the more I think about if the film makers are truly capturing the grand scale of the world shattering hits that the heroes and villains dish out. One scene in particular that I want to focus on in this post is when Thanos throws the moon at Iron Man. More specifically, I want to try and figure out how much mechanical energy Thanos would add to the system by throwing the moon. 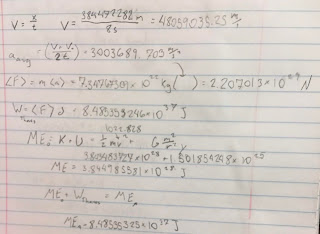 One of the craziest theoretical concept in physics is that of the Twin Paradox. The Twin Paradox is rooted in Einstein's theory of general relativity. It relies on a concept called time dilation. Time dilation says that when an observer in is an inertia reference frame (acceleration equal to zero) and another object is in motion relative to it, time will appear to slow down for the person in motion. The Twin Paradox states that if two twins both started measuring time at the same instance and one of the twins moved around at a high speed and came back, the twin that stood still would have experienced more time past then the twin in motion. 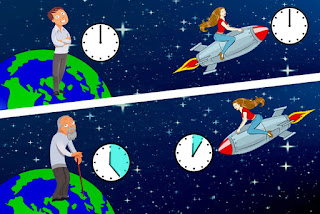 In the movie "Contact", Palmer, played by Matthew McConaughey, explains the Twin Paradox perfect but the movie didn't listen to its own script though. They actually did the exact opposite; when Dr. Ellie Arroway travels ear the speed of light and comes back, she ends up experiencing more time than the people on Earth. If it was reality, she would experience a short amount of time while the people would experience a longer amount of time. If I had to fix the script, I would have her be away for the same 18 hours as in the movie, but instead of everyone experiencing no time at all like in the movie, I would have every person be long since removed from that instant having a couple years passed.

To Bomb or Not to Bomb

Atomic weapons have always been a major source of controversy ever since they were first imagined. The ludicrous amount of power they produce can be scary for most to comprehend. I personally believe that the research and development of such weapons is a great way to further our understanding of the universe and can lead to more scientific discoveries. One great example of this happening already was the development of nuclear power plants. Without the Manhattan Project and the development of Little Man and Fat Boy, the world's second largest producer of energy wouldn't even exists. Aside from fossil fuels nuclear power plants generate the most energy in the planet and that is all due to the nuclear bomb. Who knows what kind of developments could come from nuclear testing in the future.
Posted by CKane at 6:46 PM 1 comment:

Warmer Waters: Good for Bathing, Not for Fish

Recently I was watching a very interesting nature documentary on Netflix called Our Planet which shows absolutely stunning footage of natures true beauty while a narrator informs the audience about the life that is being shown. If you have not seen it I highly recommend it. Anyway, as I was watching the show one major theme seems to pop up all the time and that is global warming/ climate change. This seems to be man's largest global crisis right now and it is greatly affecting our planet. In this blog I would like to inform everyone about a part of climate change that many people know or talk about and that is our oceans. Along with many places around the Earth, our ocean's are becoming warmer. This is affecting the life that live in those waters more than most know. 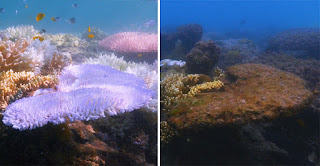 One of the biggest problems facing our ocean's ecosystems is coral bleaching. While only taking up 1% of the sea floor, about 25% of marine species live in coral reefs. Healthy and productive coral reefs are on of the most important ecosystems on the planet. When the ocean's temperatures get too warm, the coral start to get rid of the plants that live within them that help them get food and in turn, they turn white. This is referred to as coral bleaching. Over 1000 km of Great Barrier reef bleached in 2017 and many of those coral died like in the image above. Without coral reefs many of our ocean's species will die.

If you want to see more about the state of our coral reefs and all of our planet's ecosystems go to ourplanet.com. Our Planet is not only a documentary on Netflix informing us of the effects of global warming on Earth but is also an organization run by the World Wildlife Fund (WWF) to try and educate the world on how we can fix global warming.
Posted by CKane at 11:50 AM 1 comment:

Weight is defined in physics as the force acting upon an object due to its mass. Or in simpler terms, weight is a force that is equal to an objects mass times the acceleration due to gravity, F=mg. Weightlessness is not an absence of that force, in fact it is the complete opposite. Weightlessness is when the only force acting upon an object is the force of gravity or its weight.

The force that we perceived as our weight is actually the normal force of the floor pushing against our feet counteracting your weight. When you feel weightless it is actually because of a canceling out of a normal force so it is essentially not acting. This is achieved by having a centripetal force act in the opposite direction of the normal force.

So when an object is weightless it is the centripetal force cancels out the normal force and the only force acting on you is the gravitational force.